“They stole our forests and our water. We took our medicine from the forest. Now, they put police and dogs at our door.”

In Sape do Norte, in the far north of Espirito Santo, Brazil, 32 communities refer to the 111,000 hectares of land as the “green desert”. Quilombolas, members of these communities, are the descendants of slaves who created settlements called quilombos. The “green desert” refers to the eucalyptus plantation which has gradually spread over land that they claim is rightfully theirs.

The eucalyptus monoculture arrived in the region during the 1960s under Brazil’s military dictatorship. “The lands were not clearly divided or marked by fences,” community leader Domingo Firmiano dos Santos said. “The absence of land titles facilitated illegal occupation. Anyone who didn’t sell their piece of land at a bargain price was pressured, threatened, and forced to leave.”

Fibria Celulose, the global leader in bleached eucalyptus pulp and a paper company which exports to more than 40 countries, now owns and manages these eucalyptus plantations. The company said in a statement response for this article that it also owns all the disputed lands in question.

“The monoculture quickly spread to all the communities, leaving the people isolated in the middle of this green desert,” said 72-year-old Renan Oliveira, a resident of the community.

Fibria has been resorting to legal action against quilombo communities claiming ownership of the land. In its statement, the company says it has been successful in some of these cases.

Today, only three communities in the region have their land officially recognised by the Brazilian state as designated quilombo territory. Though after lengthy court cases to gain this recognition, none hold documents proving their right to the lands, further complicating the claims of injustice carried against them by the authorities and the company.

Of the 12,000 families who lived in the region during the 1960s, only 1,200 remain, according to the Sape do Norte Quilombola Commission.

Another factor affecting the community is the consequent water shortage from eucalyptus cultivation. Since the eucalyptus was introduced, more than 130 streams have dried up in the north of Espirito Santo, according to the environmental NGO Federation of Social and Educational Assistance.

The plant naturally absorbs the surrounding water in the area, while the company further aggravates the issue by using trucks to pump water from nearby streams to irrigate the plantation, leaving the local population unable to grow their own crops for sustenance and limiting their access to drinking water.

The community is left with few options for survival, they say.

Some have turned to cutting down the eucalyptus plants they say encroach upon their land to produce charcoal to replace lost income from crops they would otherwise be growing. But when they resort to cutting down the plants, Fibria accuses them of theft and, aided by local authorities, violators are punished with jail time and hefty fines.

For half of the 150 families living in Sao Domingos, at least one family member has been arrested and charged with wood theft crimes, according to residents and official records of arrests.

“I was described as a dangerous criminal and gang leader,” he said. “Here in Sape, there is no other way: we either cut down the eucalyptus, or they plant it right inside our houses.”

He was arrested on timber theft and conspiracy charges on August 14, 2015, and placed in a six-person cell with 30 other prisoners.

“I felt like a thug, a non-being. We slept on the hard ground for 21 days, and used the same sink to [defecate], drink and bathe. I encountered hell there,” Blandino said.

After 10 days, he thought he would never be released. However, a number of protests were organised by the Sao Domingos, Linharinho, and Angelim communities, including one which shut down the major BR 101 highway. Some demonstrations drew more than 500 people. As a result, along with family members who were also arrested, Blandino was finally released.

Similarly, Ledriando Manoel Maria and his son have been on weekend house arrest for nearly two years for stealing eucalyptus. They can go to work during the week, but during weekends they are only allowed out of the house with a Bible under their arms.

Maria claimed he took nothing more than a few tips of branches to use in the oven for cooking.

“I never stole anything from anyone,” he said. “We are farmers, not thieves. After the firm arrived, we now have to settle for leftovers: leftover wood, leftover water, leftover land,” Manoel Maria said. “And they still imprison us for trying to survive.”

Maria’s wife, Eni, said they are being criminalised. “Every so often, a court official turns up at our homes with a subpoena, and the charge is often that we are forming a criminal gang,” she says.

The Espirito Santo court refused to comment to Al Jazeera on this matter.

Justice is slow for those affected by these policies. Maria’s alleged theft took place in 2005, but the courts did not rule on the case until 2014. In addition to the house arrest, he has an outstanding fine of 800 Brazilian reals, or about $244, that he still owes.

Maria says he was at his farm harnessing his donkey, early in the morning, when the police arrived to arrest him, just after a Fibria security guard warned him they would.

In the past year alone, the Sao Domingos community in Sape do Norte has counted 10 arrests and a further 12 residents who are being sued.

They claim community leaders are targeted the most by police.

A large police operation in 2009 – which resulted in the arrests of 39 people in the Sao Domingos community for charges of theft and conspiracy – is the subject of a pending legal case. Women and elderly people, including a blind man, were handcuffed during the operation and led away by armed police with sniffer dogs.

In 2013, the Federal Public Ministry deemed the police operation illegal and condemned Fibria to pay around $31,000 to the Sao Domingos community, with $3,100 in damages for each resident arrested. However, the case stalled when it underwent an appeal and is currently awaiting the next judgment from the Regional Federal Court.

In bringing the case to court in 2013, the Federal Public Ministry said that “violence caused by unreasonable police action brings community members to a situation of fear, which brings back memories of bad events of the past when, deprived of legitimate rights on the occupied land, they lived persecuted, humiliated and with a constant feeling of helplessness”.

Judge Nivaldo Luiz Dias, who presided over the case, later criticised the operation for not providing food to the arrested community members, who were also dropped off 30km away from their homes once freed.

“This violates human dignity,” he wrote in his legal statement.

Federal Public Ministry prosecutor Guilherme Garcia Virgilio added: “[The quilombolas] are cornered. They have gotten organised and managed to fight for their rights, but they live in terror.”

The military police of Espirito Santos declined to respond to repeated email requests for comment for this article about the actions taken against residents.

Fibria continues to expand its farmland, and as eucalyptus planting has increased, so have the efforts of the community to cut it down.

As a result, tensions continue to grow.

Over the past five years, more than 300 people were indicted in the region for timber theft, according to Espirito Santo’s State Secretariat of Public Security, with police raids on communities accused of theft frequently including sniffer dogs, helicopters and armed cops – operations described as “war” by locals.

The state’s human rights secretary, Julio Pompeu, claimed there was no coordinated action between police and Fibria, stressing that residents who felt threatened could make anonymous complaints to a dedicated hotline.

However, some quilombolas say the persecution intensified after they started to make legal claims for their land as far back as eight or nine years ago, through formal complaints made to The National Institute for Colonisation and Agrarian Reform, a federal agency that oversees land reforms.

According to the Fibria statement provided for this article, currently 375 families in Sape do Norte communities take part in the Territorial Rural Development Programme, a Fibria initiative that includes the assignment of areas for different crops (corn, annatto, cassava, pumpkin, watermelon, and beans, among others). The programme also teaches community members technical and marketing skills.

Fibria also set up a cooperative in May 2014, in which members of the community can work directly for the company. In the translated statement, Fibria says: “The partnership has been yielding good results: It improves the quality of life of the families involved. The activities are carried out in accordance with the health and safety standards of work demanded by Fibria,” adding that “the cooperative members have access to programmes to foster development and income generation.”

But these efforts from Fibria have done little to placate the anger of some quilombolas. Community leader Elda Maria dos Santos, 56, said the company has “stolen” their land and resources.

“They stole our forests and our water. We took our medicine from the forest. Now, the state puts police and dogs at our door [and files] legal cases with nothing behind them,” she said.

“What we want is our Mother Earth. It is not to buy or to sell. It is to pass from generation to generation, to leave to our children,” dos Santos said.

Chopping down wood remains the main form of resistance by the quilombo communities. Groups of people from the community continue to cut down the eucalyptus and sell it, afterwards planting food crops and declaring the land “retaken”.

“There are no services here. No one has any form of income. The only way is to pool resources and cut down the wood to survive. But this is not stealing,” said Creusa Mota, 61, another community leader in the Roda d’Agua quilombo. “We don’t feel like thieves.”

“Only by remaining in place and resisting can we claim what is ours,” added Santos.

Another version of this story first appeared in Portuguese on apublica.org . This version was translated and edited by Beth McLoughlin. 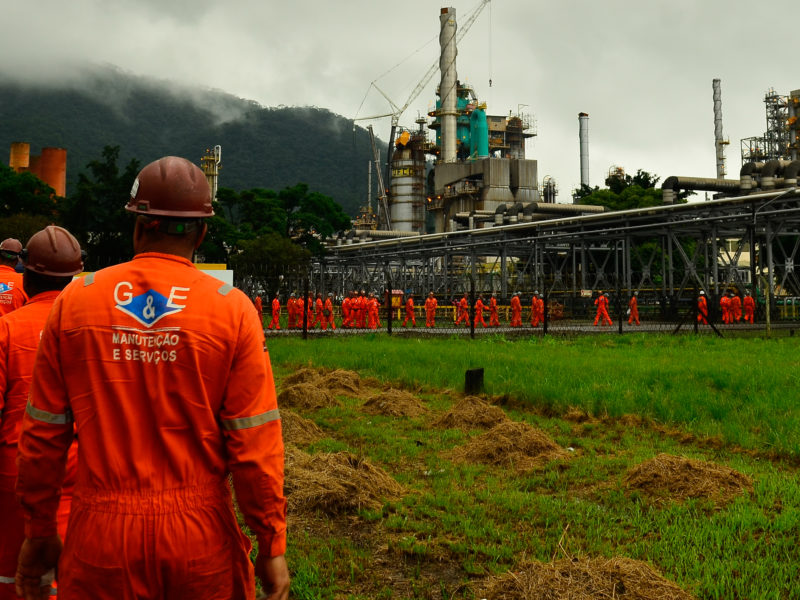